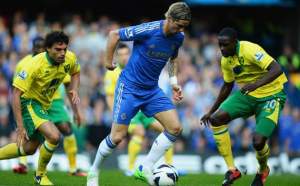 Another week for the English League and I’m super excited for the week. A couple of very good games to top off a strong week for England in the Champion’s League as they win three of their games and tie one. This one will about Chelsea (of course) and finally having the time to talk about a game has made me very excited. Today’s match was with Norwich City at Stamford Bridge, and Norwich’s away games have not looked pretty. However, this is the English Premier League, where no game is easy and every match is taken with the highest consideration. Anyway onto the game.

Chelsea started out strong today with some good attacks starting from the two defensive midfielders today, Obi Mikel and Lampard. However, it was the Canaries who opened first, as an 11th minute goal off a counter attack gave them the lead. A strong volley off the header back, along with some view obstruction of Cech’s vision, gave none other than Grant Holt the first goal of the game. However, Chelsea were not going to stand and let that score line settle down, as 3 minutes later, Chelsea’s top man Fernando Torres buries on in the opposite corner in tremendous fashion off a expert cross from their right back Ivanovic. This opened up the rest of the game, as Chelsea continued the attack on the Norwich defense. However, a failed bicycle kick from Torres to deny his second led to Frank Lampard’s smashing volley, giving him the second goal of the game and his first EPL goal since February.  It did not seem like Chelsea was content at that point, as unrelenting pressure from the attacking force kept on striking. With little answer from the yellow side, Chelsea found their third off a counter attack, led by Chelsea’s 2011/12 Player of the Year Juan Mata, who seems to have no plans on getting second season jitters. Juan Mata, with three Man of the Match’s in a row, started the counter with Torres and Hazard streaking along side, eventually finding the Norwich gap that gave Chelsea’s Belgian a chance to expertly slot it past Ruddy. In the 31st minute, Eden Hazard achieved another goal of his EPL season. This ended most of the major tackles in the first half, as Norwich still has no answer after a strong start to the game.

Second half was much of the same. Chelsea came out with a semi-lackluster performance and did not look all that interested, with a command on the game and a lead on the scoreboard, Chelsea were flying high. However, after the 60th minute, things changed for Norwich’s worst, as Chelsea’s attack looked to be stronger. The added momentum of Oscar, who had many looks on goal, and the pace of Hazard and Mata eventually brought the Blues to their fourth, as an absolute smasher of a goal came from Ivanovic, who hit it too strong for Ruddy to keep out. Ruddy did get a hand on it, but the Serbian right back hit it too hard from too close. A giant gap in the 18 box gave Ivanovic the composure to smash a one-touch volley into the Canaries goal. After this, one or two instances of life from Norwich fell short as Chelsea continued to press on as well, as the attack did not look like it would end for Norwich. After 90 minutes of bombardment at Stamford Bridge, the game came to a unsurprising ending, as in-form Chelsea took a comfortable fixture over out-of-form Norwich.

Other notables were Oscar’s strength in attack. Oscar seemed to get a couple shots off, but otherwise contributed more as the great attacking midfielder he is.  Grant Holt’s constant ability to find openings in defense is a scary one, and a in-form team would give him the opportunity to score at a constant rate.

Chelsea- Strength in attack took over their strength in defense, as the young men up top seemed to take control of the game with the help of the defensive midfielders and the two side backs. In my opinion, defensive looked iffy at times, but the attack kept them  well into the game, as the small answers the Norwich has for Chelsea gave the attack the ability to create their own game. Playing a 4-2-3-1, and probably doing it the best in England, the formation gave the home side the chances to keep forward with strong attack, as well as the opportunity to counter for the third goal from the Blues. Man of the Match was clearly the Spaniard Juan Mata, who started attack and made hell for the Canaries. His expert passing and strong fundamentals gave Chelsea everything they needed to put attack on the opponent’s net. A good game from the home side going into the international break.

Norwich- Not much to say about a team that hasn’t looked good since the beginning of the year. Honestly, Norwich became my mini-favorites last year, with the strong attack that they had and the never-say-die attitude that they kept through the season. However, it doesn’t seem to be clicking this year, as everything is out of place. Attack is, more times than not, relatively elementary, with almost no depth in ability or teamwork behind it. If they want more  points, the attack will have to be more complex, especially on all the good defensive teams in the league this year. Defensive was an even worse issue, as they were unorganized and easily scrambled, Chelsea’s Juan Mata looked to open them up easily. Not a good game from the Canaries, but then again, they haven’t had one all year.

Last note- I’m really happy to this and I’m glad to be back and writing about football. Will hopefully commentate on the Gunners vs Hammers match, as that game proves to be interesting, especially with the form that the Hammers have been in their first season back from the tier under.

What started as a crazy first ten minutes resulted as a game of strength on strength. Italy, obviousy playing just a bit better than England. There isn’t much to say but I’ll bring up some halftime notes!

England-I think their main problem on the right side is James Milner. He slows down the game considerably and messes up in crucial times. I say throw Theo in there and let him do his magic. Other than that, Welbeck hasn’t seen much of the ball, so I say throw in Andy Carroll and get some width into the team. Other than that, I do not see anything other than the solid defense and strong will of John Terry saving there butt once again.

Italy- Other than the lack of finishing quality, I say don’t change anything and make sure that you get more opportunities to have more shots on goal.

Although I can’t say that the extra time was surprising, the game was definitely an exciting match. Italy played very well and tested England’s defense for a solid 120 minutes without prevail. That’s not to say that England was parking the bus, as they had a decent amount of attacks but nothing as dangerous as the attempt early in the match that Buffon magically stopped. For most of the game, Italy attacked with pace and strength, showing anyone who said they didn’t deserve to be there a thing or two (I’m on that boat). No game should end by penalties, and I hate to see like England leave because of my ties to the Barclay’s Premier League but the game must be decided. Some notes for the teams, even a little for England and Roy.

Italy- After this game, Italy has shown is offensive teeth, as England was forced to play defense for most of the time. The attacking power of Balotelli and Cassano was definitely felt hard by England, as the support threat of Pirlo was always lurking. Buffon was top notch as always, showing a bit of youth and expertise at the same time. The one worry I have is Italy’s ability to score, which has not been prevalent this tournament. If they want to beat Germany, scoring is gonna have to be something the get down over the break. Other than that, making sure that Schweinsteiger doesn’t create and Mario Gomez doesn’t get free looks on the net are on top priority goals. Also, playing with the same style and pace as they did today will score them a goal on the weaker defense of Germany.

England- Defense was solid enough to hold a Italian onslaught but the offense was terribly poor even with the Rooney addition. Andy Carroll showed more life and worth than Rooney and Welbeck, and that is a major worry for them. Rooney did not have a good tournament show, almost comparable to Robin van Persie. Two players who both had amazing seasons in the Barclay’s to show up and not do anything for their countries. Maybe not having Lampard was a bigger issue than thought, but the bottom line is that Roy needs to think of something for the offense if he is still here by 2014.